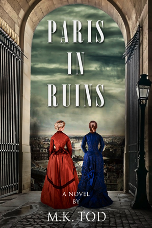 Set in Paris in 1870 Mary explains that her, “latest novel, Paris In Ruins, was sparked by the idea of taking a character from Lies Told In Silence back to a time when she was roughly twenty years old. I could have chosen some other French city, but when I discovered the momentous historical events that occurred in 1870, Paris was the only choice. It’s one of my favourite cities to visit. I love the buildings and the boulevards and the parks that were created in the fifteen or so years prior to 1870. I love the museums and galleries, the food, the wonderful shops, and the cafes and bistros. Paris has its own personality, a certain joie de vivre that is evident when you walk the streets. It lives and breathes history.” 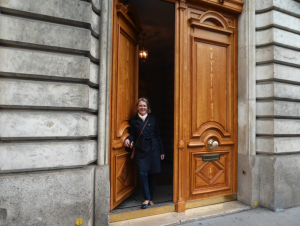 Immersing herself in the life of Paris enabled her to add une saveur an extra flavour to her writing and description of Paris on the eve of the Paris Commune as she explains, “My husband and I took a three-week trip to Paris while I was doing research for Paris In Ruins.”Photo: Mary Tod leaving her holiday apartment in Paris   They had, “been to Paris before, but never for more than a few days. This time we rented an apartment and tried to live almost like Parisians do. By this time, I had many chapters written and a solid outline for the rest. With those in hand, I created a master list of places to see and things to do and the topics I needed to further understand. The trip was magical. Three weeks of immersion in the world of Paris was not only a spectacular trip but also a wonderful way to absorb the feel of the city, to watch the people interact, to listen to the language, to see the trees and flowers in bloom, and to let my imagination roam. A lingering sense of being there guided the writing of Paris In Ruins.”To find out more about Mary Tod, her novels and her blog see: