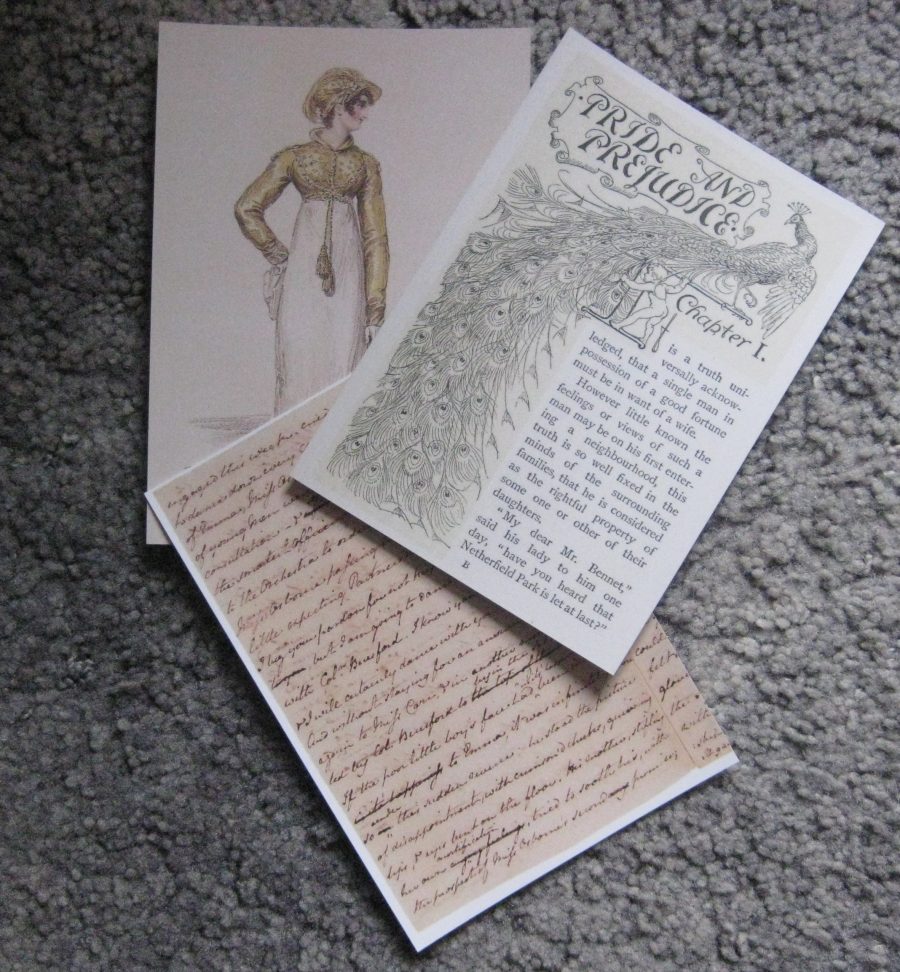 Having turned right into Old Bond Street one had just a tiny glimpse of the type of houses that Willoughby lodged in in ‘Sense and Sensibility’ where he wrote his selfish and heartless letter to Marianne. Although the sound of cars and taxis has replaced that of horses and carts it does still have at least one thing in common with the 18th century and that is the tourists. Today they come from all over the world, but in Jane’s time they would have often been affluent ‘out of towners’, those who aspired to be fashionable, but were less ‘well-heeled’ and others like the French émigrés, who opposed Napoleon or had remained in exile after the French Revolution. 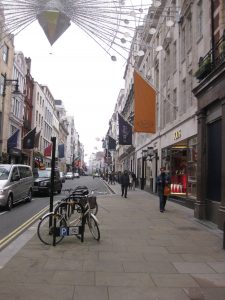 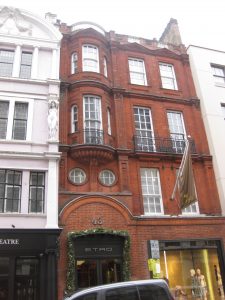 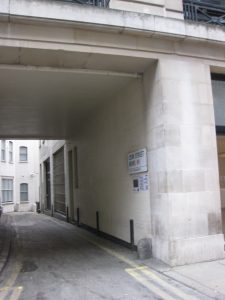 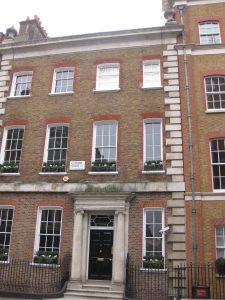 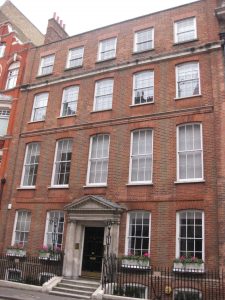 By turning right into Burlington Gardens, it was possible to spot Cork St, but sadly not the old Bristol Inn where according to Constance Hill* it is possible that Jane may have stayed. The only trace of the Inn is possibly to be seen on the left. It is in the form of an archway that leads to a mews through a narrow passage. This might possibly have been the entrance to the stables at the back of a coaching inn. Nearby is the ‘Coach and Horses Yard’, which clearly illustrates that this part of Mayfair was used by travellers after their bone shaking journeys from places like Bristol and Bath.

At this point in my ‘perambulation’ I realised that something was missing. I couldn’t possibly recapture Jane Austen’s London without the sounds and the smells that would have surrounded her, but unless very unusual were not described in her novels. The reason of course being that she didn’t need to describe them as all her readers at that time lived with all the same smells and scents.

Agatha Christie (www.agathachristie.com) it appears, may have shared some similarities to Jane Austen in that she wrote entertaining letters to her family and could stand back from the society she lived in to capture in words their quirks and foibles. Christie was also able to be social when she chose to be so, but could merge into the background if it suited her. However, Christie unlike Austen, used the power of smell to enrich her descriptions and to help create atmosphere and a sense of the period in which she set her novels.  The equivalent of the ‘flying machines’ as they were called in Austen’s time for Christie were steam trains. Most of her readers would have travelled by train at some time and Christie capitalised on this in the way that Austen did when describing the social hierarchy and rigid code of ‘deportment’ and ‘manners’ that characterised the time she lived in. Christie could create an empathy with her readers through describing recognisable and ‘common’ scents, aromas and smells. One very clever illustration of this is to be found in ‘Hercule Poirot’s Christmas’ first published in 1938 by Williams Collins Sons and Co., Ltd:

“Pilar sat squeezed up against the window and thought how very odd the English smelt…It was what had struck her so far most forcibly about England- the difference of smell. There was no garlic and no dust and very little perfume. In this carriage now there was a smell of cold stuffiness – the sulphur smell of the trains – the smell of soap and another very unpleasant smell – it came she thought, from the fur collar of the stout woman sitting beside her. Pilar sniffed delicately, imbibing the odour of mothballs reluctantly. It was a funny scent to choose to put on yourself, she thought.”

Agatha Christie would have known the same corner of Mayfair as Austen and even set one of her own novels ‘Bertram’s Hotel’ in one similar to Brown’s Hotel, Albemarle St, Mayfair where she stayed regularly. (https://www.roccofortehotels.com/hotels-and-resorts/browns-hotel/story/) The hotel, opened in 1837, (‘under the watchful eye of Lady Byron’s maid, Sarah and her husband, James Brown’) is in itself an interesting building made from 11 Georgian townhouses.

When trying to imagine the smells that accompanied daily life in this part of London one would imagine that it might have been ‘redolent’ (not in the sweet-smelling sense) with the scent of stale urine and rotting fish and rather like walking past the back entrances of restaurants on a hot summer’s day when the rubbish has been waiting to be collected for a week.

It is also hard to imagine the atmosphere of excitement and the ‘buzz’ that this part of London with its coaches, tradespeople, visitors and passengers must have had during the period. The comparison that springs to mind is Paddington Railway Station at Christmas. Crowds of people with copious amounts of luggage all waiting anxiously for their trains, the aroma of bacon baps and coffee and a tannoy system blaring out incomprehensible messages, while carol singers raising money for charity are singing cheerfully in the station concourse. The tension of wondering if your train is about to be cancelled may not compare with worrying about being held up by highwaymen, but is nonetheless a major source of tension. M.C. Beaton (www.mcbeaton.com) in her Regency series ‘The Travelling Matchmaker’ has managed to conjure up for her readers a taste of what it must have been like to travel by coach from London. Miss Hannah Pym travels to different cities to satisfy her desire to travel and because of her love of ‘the flying machines’. So for her ‘standing, slightly open-mouthed, in the courtyard of the Bull and Gate in Aldersgate in the City of London at quarter to five on  a freezing-cold morning, the stage-coach was romance on wheels,’ whereas members of ‘the Quality’ regarded a journey by stagecoach as akin to ‘a lingering death’ (p.24, Emily goes to Exeter, M.C. Beaton, Constable & Robinson, 2011).