All over the world there are small and unusual museums run by dedicated volunteers that highlight fascinating and often hidden details about history. 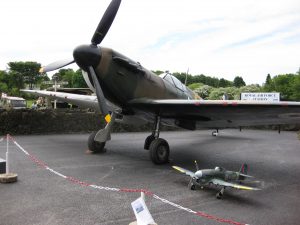 One local example of an often overlooked site and cafe-style museum in Devon is RAF Harrowbeer, near Plymouth. It was built during the Second World War and is now popular picnic spot.

This airfield was not exactly a pilot’s dream as far as landings and ‘take offs’ were concerned. https://en.wikipedia.org/wiki/RAF_Harrowbeer

As one young Canadian pilot from 193 Squadron describing his first training flight in a Typhoon fighter explained, “We were understandably in awe of the Tiffie’s size and power. We had been warned of the violent effect of torque . . . which caused a swing to the right on takeoff . . On takeoff, I locked my left leg rigidly on the rudder bar . . . I got off safely . . [but] At times I felt as if the machine was flying me! . . . [on landing] To make sure I didn’t stall it, I came in with a little too much speed. The runways at Harrowbeer were not exceptionally long and I could see a pile of bricks at the end coming up fast. Luckily, the brakes held and the machine stopped in time.” https://www.abct.org.uk/airfields/airfield-finder/harrowbeer/

Such seemingly insignificant, but often significant and enlightening details can be found on a daily basis at:

For writers of historical fiction ‘Museum Facts’ provides fascinating glimpses into past history which can spark off a story idea or enrich their writing.

“Museum Facts. Your daily dose of history facts. One fact at a time.

We believe in making history fun and easy to read by uncovering its quirky, bizarre facts and presenting to you with beautiful visuals.

From a story on the museum of Poo in Isle of Wight to never heard before facts on the Roman empire, we take pride in everything we publish.

We have come a long way since our humble beginning as a twitter account that posted 140 characters long history facts to earning over a million impression every single month. Our combined Social media following is nearly 500K and growing every single minute.

We do not believe in big banner sponsored contents to decorate stories that mask out the actual historical truth. We remain politically neutral and keep education as our primary goal at heart. If for whatever reasons, you feel this is not the case, please reach out to us. “