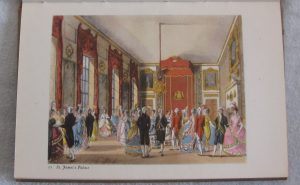 Late 18th century – Getting ready to celebrate in a Royal Fashion

An activity aimed at stretching your creative imagination, and to encourage you to dip your creative feet into a new pool of ideas.

Charlotte took the part of the man as usual. When she’d signed up to learn the tango she had hoped that she might be thrust into the arms of some handsome man who would fall deeply, madly and passionately in love with her.

At school, because of her height, wide shoulders and size eight feet she’d never wanted to do anything except pin herself firmly against the wall and pretend she didn’t exist. Now she was dancing with Melissa, who’d learnt tap dancing and whose regular partner had broken his leg. Hence Charlotte had been drafted in. The music started and breaking on one, left, two, three, back five six seven she caught the rhythm. Her heart bounded with the beat, made her feel ‘loco’ and lose herself.  She was no longer weighted down by her cumbersome body but had become the exotic person she longed to be.

This would be her last dance with Melissa because their course had ended. Charlotte would enroll again next term, but this time she was determined to find a man to be her partner even if she had to murder in order to get one. (c.190 words)

The air raid siren screamed its warning into the air, but Della refused to stop dancing.  The band was playing “Chattanooga Choo Choo” and she and Smithy were holding each other as tightly as they could as they jitterbugged around the shiny-floored dance hall.

They could hear the drone of the aircraft making their way over the city, but Smithy kept swinging her around.  They were both giddy with love and they knew that this was likely to be their last dance. Even if a bomb didn’t kill them tonight he was still being shipped out the next morning. The band kept playing and Della and Smithy wanted to keep dancing to the bitter end. (c.115 words)