A MOST ENGLISH PRINCESS Clare McHugh’ s debut historical fiction novel will be published in the USA/Canada by HarperCollins on the 22nd of September and in the UK from October the 29th. Readers from other countries will be able to purchase it from Amazon US (ISBN: 0062997602). 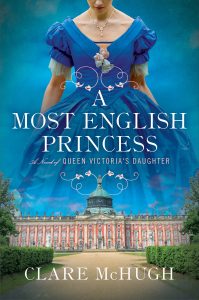 For further information about Clare and her writing see http://claremchugh.com and https://twitter.com/Claremch

Clare worked for many years as a newspaper reporter and magazine editor before pursuing her dream to write fiction. She has kindly shared an insight into the her debut novel and why she was inspired to write it.

Clare explains that, “Quite soon after the marriage of Kate Middleton and Prince William in April 2011, a new law was passed by Parliament, having first been endorsed by the heads of the Commonwealth nations. No longer would the order of succession to the British throne favor males over females. Now the eldest child, regardless of sex, would be heir.

When I read about this change, I had a wistful thought: might the measure be dubbed “Vicky’s law” to honor Queen Victoria’s eldest child, a girl of intelligence, energy, and commitment who was the last person passed over for the crown because she was female. All the sovereigns since Queen Victoria either had boys first, or in the case of the current queen’s father—George VI—only girls.

The poignancy of Vicky’s story has long fascinated me—perhaps because I’m the eldest in my family, and have a brother only a year younger, as she did. It was easy to imagine how painful it would be: relegated to second-best when you are first-born just because you were a “lesser”— a girl. 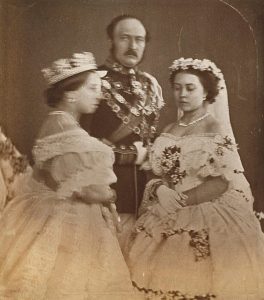 I also had a particular interest in the Royal Family and the late Victorian era from what my mother told me of her own mother’s childhood. My grandmother, born in 1889, grew up in Gosport, near Portsmouth, where boats departed regularly for the Isle of Wight. Her parents worked in the household of General Robert Montgomery, General Officer Commanding South Coast Defense—her mother as housekeeper and her father as coachman, later chauffeur. Royal persons could frequently be spotted passing through Gosport en route to stay at Osborne House, and we have a much-cherished photo of my great-grandfather driving King Edward VII, Vicky’s brother Bertie, and his nephew, the Kaiser, Vicky’s son. In the photo below, which dates to 1905, the King is far left, with the Kaiser beside him and Henry George Lampard, my great-grandfather, holds the reins. 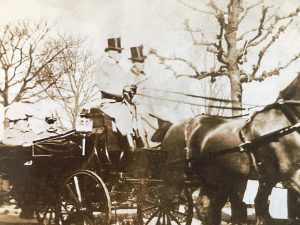 My interest in Vicky deepened in college, when I studied the rise of Germany as a nation-state, the outbreak of the First World War, the country’s tragic turn to fascism and the horrific Nazi regime. The reasons for the German descent into barbarism and genocidal madness are still debated by historians. But the seeds of later tragedy were planted in the late summer of 1862 when King Wilhelm of Prussia contemplated abdication in favor of his son Fritz, Vicky’s husband, and instead chose another path. Historian John Röhl https://en.wikipedia.org/wiki/John_C._G._R%C3%B6hl writes: “We know that the King finally decided to appoint Bismarck….[but] right to the end, the struggle might easily have ended differently. We are dealing here with one of those eerie moments where history holds its breath before revealing the fate that lies in store for future generations.”

Vicky was a close witness to this hinge moment, and while I relied on imagination to conjure up the discussions between her and Fritz, her letters to Queen Victoria detail her deep distress at Bismarck’s ascendency and the choices he made for Germany in subsequent years. Going from young bride, to Crown Princess, and eventually to Empress of Germany for a scant 99 days, the Vicky I discovered in these letters is an affectionate daughter and a surprisingly modern thinker, who is determined to be the best wife, mother and public servant she can be, who rages at events outside her control, who discusses her excitement with new ideas—political, scientific, psychological. Vicky read Marx’s Das Kapital and Darwin’s On the Origin of Species with great interest. She worked tirelessly for educational opportunities for young women, and for the better care of the sick. When in the late 1870s Bismarck fanned the flames of anti-Semitism in the German Empire, she and Fritz defied their advisors to express openly their abhorrence of this invidious prejudice. Vicky accepted the honorary chairmanship of an orphanage for Jewish girls, and during the height of the anti-Semitic riots in Germany in January 1881, she accompanied Fritz, wearing his full-dress uniform as a Prussian field marshal, to services at a Berlin synagogue.

Her progressive attitudes earned Vicky the enmity of many in her adoptive country, to whom she would always be “die Englanderin,” an anti-Prussian agent of a foreign power. Bismarck’s allies encouraged rumors that she dominated her husband. For many years, Vicky stood strong against these calumnies, but the double blow of her eldest son, Willy, turning his back on his parents and joining the reactionary camp, and the illness and premature death of Fritz at age 57, just as he inherited the throne, threw her into depression for several years. The building of a new home outside Frankfurt, called Friedrichshof in Fritz’s memory (now the glamourous Schlosshotel Kronberg), revived her, as did her relationship with three of her daughters. (Charlotte and she were not close.) Her youngest son, Prince Waldemar, tragically followed Siggy to an early grave, dying of diphtheria in March 1879, at age 11, just four months after Vicky’s beloved sister, Alice, died of the same disease at her home in Darmstadt.

My awareness of all the sadness in Vicky’s life did not deter me from spending two years in her company composing this story. Her most sterling quality —her desire to be good and do good—inspired me. And the contradictions of her life intrigued me. How did this woman who was used in an archaic way—married off for dynastic and political ends—find purpose and fulfillment as an individual? How did she use her influence to shape events? What did it feel like to enjoy great privilege and yet cope with crushing disappointment? In truth Vicky often made mistakes and got in her own way. Her beloved Fritz once said her greatest flaw was over-confidence in her own opinion. But her life’s journey was a noble one, and I hope A Most English Princess will inspire readers to learn more about Vicky, and the turbulent times in which she lived.”

Vicky as a widow in 1900, already ill with cancer. Kaiser Wilhelm II kept a copy of this photo in his home in exile in Doorn, the Netherlands. 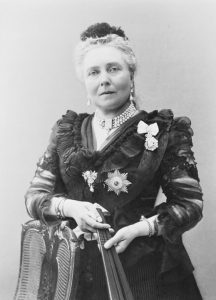 Clare continues by explaining that, “The monarchy was abolished in Germany in 1918 and Vicky’s son, Willy, lived until his death in 1941 in exile in Doorn, in Holland. But today Elizabeth, Vicky’s great-grandniece, the great-granddaughter of her brother Bertie, is Queen of England. And her husband, Philip, is the great-grandson of Vicky’s beloved sister Alice. Vicky’s own descendants live all over the world—many in Germany, but others in the UK, and some in the US.

I’m a fan of New York City’s High Line park, for its amalgamation of beautiful gardens and modern urban design. A young architect named Tatiana von Preussen—Vicky and Fritz’s direct descendant, the granddaughter of their great-grandson—was part of the High Line’s design team. Strolling along the park’s wooden pathway on a sunny afternoon recently, I thought how fitting it is that Vicky who loved gardens and art and promoting the general welfare is connected in a small way to this marvelous public space. None of us know what our legacies will be, and Vicky, who strived so hard to do good, is no exception.”