Local history and community month in the UK. <https://www.history.org.uk/historian/resource/1567/local-and-community-history-month> 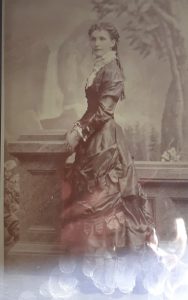 Local history is an excellent source of inspiration for writers of historical fiction. They are able to uncover a wealth of stories about real people which can provide them with characters, events and details of life that can transform a fading photo into an engrossing story that readers can submerse themselves in.

Stories about local communities can also enable us to step back from our current challenges. It can help us to see that some problems and situations have recurred over the centuries, and that ordinary people living hardworking lives overcame these obstacles and that they went on to live fulfilling lives.

One such story is that of Rebecca Henwood who faced an outbreak of cholera in Tavistock. Her story was eventually written up by a local paper.

Self-isolating is not a new phenomenon in Tavistock. In 2007 while carrying out research on behalf of the Tamar Valley Mining Heritage project I came across this story about Rebecca Henwood. Rebecca was a young mother who found herself in the middle of a cholera outbreak.

The facts about Rebecca’s life:

Below are three extracts from a Newspaper article Secret of Longevity, (Western Morning News, dated 6th of May 1911, p. 6) about Rebecca Henwood who was still “active at 95”.

“Mrs Henwood went on to relate the circumstances of her life, and said that her husband was a mining engineer, and soon after she was married, they went to live in Tavistock.  She had nine children, only four of whom are living, the eldest son who is about seventy years of age, being in Australia. Her husband had been dead for twenty-three years.  He died in West Africa, where he was engaged in mining operations, succumbing to the fever of the country.”

For sixty years she resided in Tavistock…She has a vivid recollection of the cholera epidemic in the West of England.  It was while she was in Tavistock.  She could hear the groans of a person stricken by the scourge proceeding from the house next door where she resided.  When the sufferer had expired the town officials came to fumigate her house as well as the house of where the patient had died. Rather than accept the temporary shelter they offered her and her bairns, she trudged some distance in the country, carrying a baby in her arms and two other mites clutching at her skirts, to the mine* where her husband was employed.  They slept for some days in the engine-house, bundles of straw improvised as mattresses.  When she returned to Tavistock, she found that a good many people had been swept away by the cholera epidemic, which she described as “wisht.”

Although she is mostly confined indoors, especially in the winter, she occasionally goes out, and not long ago she went to her granddaughter act in a theatrical performance.  Every year she takes a trip up the river Tamar, and is living in hopes of doing so this summer.”

“Hers is a cheery optimism, and she counsels people, if they wish to live long, to keep up good spirits.”