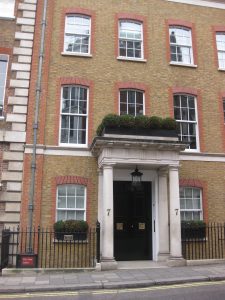 A home fit for Sir John and Lady Middleton

Having turned right into Clifford Street there is a rather elegant red-brick 18th century house of the type that the Middleton family in Sense and Sensibility might have lived in. You could almost imagine them stepping out through the doorway, with its Ionic columns, into the bustling Mayfair street intent on some frivolous outing. 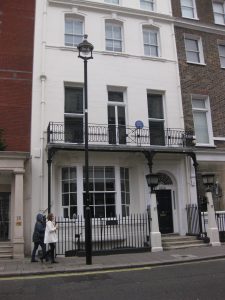 The walk continues towards Savile Row. 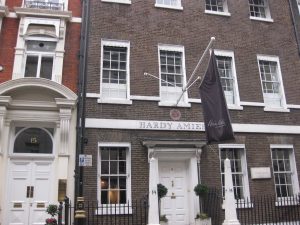 We then turned right again into Savile Row. On the left you can see the last home of Richard Brinsley Butler Sheridan (1715 -1816) author of popular ‘comedy of manners’ plays as The Rivals (1775), The School for Scandal (1780), The Critic (1779). He was a Whig member of parliament and supporter of Charles James Fox and held the position of Treasurer of the Navy amongst others at one period. He was the manager and owner of the London Theatre Royal, Drury Lane when it burnt down in February 1809. Jane Austen would no doubt have been aware and possibly seen his plays which are still performed regularly today. Sheridan lived in No 14 and died there in extreme poverty, and it is reputed that he was arrested for non-payment of bills when he was already in his coffin. 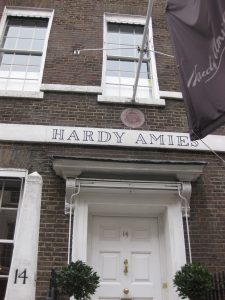 Jules Verne, apparently, thought he’d give his character Phileas Fogg (Around the World in Eighty Days, 1872) Sheridan’s address, but accidentally gave him the wrong house number.

Saville Row with its famous tailors like Hardy Amies (https://www.hardyamies.com/blog/no8/), who moved to (No. 14), Sheridan’s old address in 1945. The street full of ‘bespoke’* tailors also has an association with the films ‘Kingsman’ (2015 and 2017). ( https://www.huntsmansavilerow.com/world-of-huntsman/kingsman/) 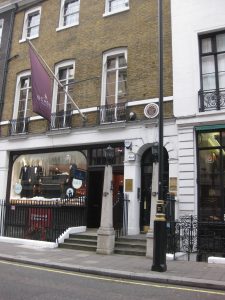 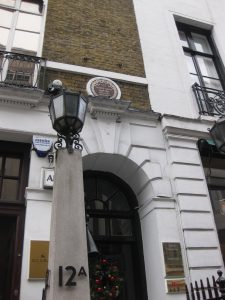 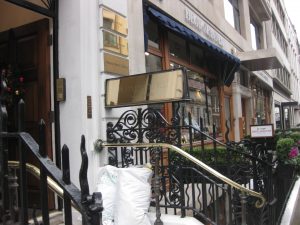 Henry Poole, who is believed to be the first tailor to create a dinner jacket (tuxedo) moved from Old Burlington Street to Savile Row in 1846. Then, “in 1865, the Prince of Wales and future King Edward VII, known to his family and intimates as Bertie, asked his tailor and friend Henry Poole to cut a short celestial blue evening coat to be worn at informal dinners at Sandringham.” (https://henrypoole.com/hp/history-of-henry-poole-tailor-of-savile-row/the-tuxedo/)

The name ‘Savile Row’ came from Lady Dorothy Savile, who was the wife of the Earl of Burlington. It is built on the kitchen gardens of Burlington House (now the Royal Academy). It’s first residents were politicians and higher ranking military officers, but by 1806 tailors had started to set up there. Their famous customers included ‘the cream of’ Regency society such as the Prince Regent (later George IV) and Beau Brummell. 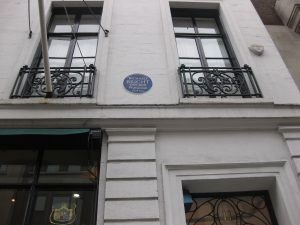 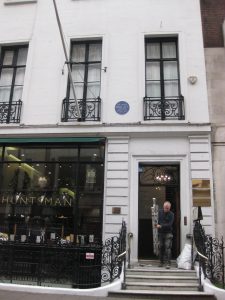 Leaving Savile Row, we turned left into Vigo Street and then into Sackville Street and, so back to Piccadilly. Sackville Street was where Thomas Gray and William Constable were recorded as having worked as jewellers*(http://www.georgianindex.net/London/l_merchants.htm) and goldsmiths in the street in the late 18th and early 19th centuries. Jane Austen does mention the shop in Sense and Sensibility (published 1811), Marianne and Elinor Dashwood visit ‘Gray’s’ and are made to wait while Robert Ferrars selects toothpicks. Gray’s is cited as being one of only two real shops that she mentions in her novels (Consumer goods” by David Selwyn in Janet Todd Ed., 2005). Jane Austen in context. Cambridge: Cambridge University Press. p. 223. ISBN 978-0-521-82644-0. 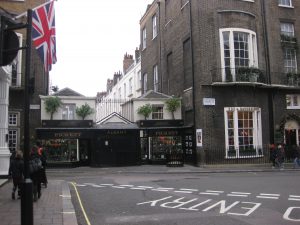 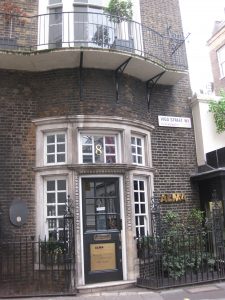 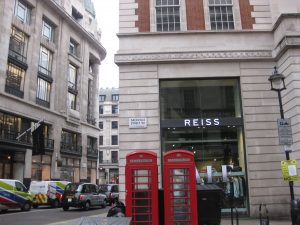 Almost back to bustling Piccadilly.

*The original verb was ‘bespeak’, which meant to “speak for something or someone”. It was first cited in c.1583 and defined in in the Oxford English Dictionary as, “to speak for, to arrange for, engage beforehand: to ‘order’ (goods)”. The American equivalent is today being, ‘customized’.