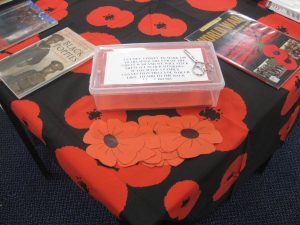 For those whose lives did not have happy endings – A display at Tavistock Library in Devon https://twitter.com/tavilibrary?lang=en

John sipped his free, but bitter tasting acorn coffee from the thick china cup. He’d also filled his canteen with milk for his journey. Icy gusts of wind blew the fine rain onto the Exeter St. David’s railway station platform, but he didn’t mind because the pretty girl with her fair hair pinned up and who’d smelt of rose water, had smiled at him as she’d served him.

He’d left Exeter’s Military Hospital Number 5 that morning, to embark on his journey back to Southern Cross in Western Australia, but before that he had a mission to accomplish. He was off to London, because of his so-called bravery in the Battle of Polygon Wood, but just for a week. He hoped the weather would improve, because it was May the 19th already and it still hadn’t warmed up. John had seen enough grey skies and incessant rain to last forever. Images of mud coated men both dead and alive flashed through his mind. John knew he mustn’t look back. He mustn’t think. He mustn’t let the torrent agony, pain and the futile deaths of his mates invade his weakened body. John put his hand inside his pocket and touched the opal and gold brooch in its velvet pouch. Then he took out the dog-eared photograph of a girl in her Sunday best clothes and thoughtful expression. On the back Don, his mate, had written “to my childhood sweetheart Florence (Flo) Northcott,”with the details of her address. Don had been born in Blighty, and only a few years before he’d enlisted he’d migrated to Australia, with the intention of making enough money to marry Flo. He’d asked John to deliver the sea-green brooch and his love, as he’d gasped for breath with what remained of his chest and lungs, as they’d lain near each other in the Field Hospital. John hadn’t been able to save Don, but he’d managed to drag four of his fellow Diggers*out of the shell crater.

That morning he’d gathered his few possessions together and gone to thank Nurse May Elliot, he’d written a few lines of thanks in her brown leather Album bursting with autographs. It had made him realise how blessed he was. The mottos, poems and lines of endearment were all heartfelt tokens of thanks not just to May, but to all the people of Exeter who’d welcomed injured Australians, Canadians and New Zealanders like himself, with warmth and comfort, entertained them and tried to heal their physical, but also their mental wounds. He remembered the first time that he’d been allowed off  his ward at Exeter’s Military Hospital Number 5, and how strange it had been to hear the Banjo Patterson’s Waltzing Matilda being hummed and whistled in a city so unlike Perth, which was the only big town he’d ever visited before. Even more frightening was having tea at Deller’s. Nurse Elliot had told him about it, because it was only one minute from the trams, but in fact he’d managed to get there under his own steam. He was really glad that he’d trimmed his moustache and brushed his uniform to have his photograph taken to send back to his parents and gaggle of younger sisters and brothers, because the ‘grand’ entrance to the Café on Bedford Street was exactly that. It was palatial, not that he’d ever been in a palace, but it had balconies, an orchestra and was very ornate with lots of curls, twirls and gold-coloured paint.

Deller’s was so unlike everything that he’d seen and experienced since he’d arrived, that he’d wanted to laugh, but had restrained himself. He’d arrived in France in the build-up to the battle of the Somme. He had enlisted because he’d wanted to see something of the World rather than to fight for any noble reasons. His first experience of war was in the Battle of Fromelles in July, 1916. All the Anzacs had been joking the evening before about the fact that despite their waterproof capes and wide brimmed hats, the worst enemy in Europe had to be the rain, especially for those who came from the parched and arid places like his home, where in summer your clothes would be bone dry minutes after you’d hung them out.  Optimism had hung in the air like the smell of tobacco, but twenty four hours and over five thousand ANZAC casualties later, optimism had fled, the only scent that had lingered in the air was that of blood, and John had learnt that they weren’t fighting a battle, but that they’d been sent like sheep to a slaughterhouse.

By September 1917 he was expecting every shell he heard and every burst of gunfire to be aimed directly at him. They weren’t just fighting the Germans, but also the weather. He put his survival of the battle of Menin Road, fought around Glencourse Wood down to his skill as a blacksmith and mechanic. His trade had saved him, because of the dire weather conditions their few serviceable few lorries kept breaking down and he’d been seconded to help with repairs. He couldn’t imagine how many of the eager young men he’d sailed with were now buried forever under a sea of mud and slime. The secrets and the identities of these soldiers would remain forever unknown and locked for eternity within the soil of a foreign field. Nearly everyone he’d met in the trenches had suffered scabies, trench fever, some form of dysentery or knew of fellow diggers who’d succumbed to pains in their sides, followed by pleurisy or worse still  infections like blu-pus, that could infect even the most superficial wound.

Sitting on the train as it rattled its way to London Paddington, he was unable to stop himself thinking back to September the 26th, when he was part of the second of three limited objective battles overseen by General Plumer. He’d been part of the infantry who’d advanced behind a barge of heavy artillery fire. The objective had been gained, but he’d nearly lost his leg, but worse still among nearly 6,000 dead or injured he’d lost his best mate.

The train’s window wouldn’t close and so soot drifted like black snow into their carriage throughout the journey. He watched the countryside pass by.  It looked so untouched, green, lush and above all peaceful.  He realised that the war had caused civilian casualties even in London, as well as airships like the Zeppelin Staaken, which in February of that year had dropped a one tonne bomb on the Chelsea Hospital.

London he discovered was almost as noisy as the trenches, with the clatter of horses, rumble of trams, and horns being hooted by omnibus drivers. Flo’s family had kindly offered him a place to stay until it was time for him to go to Folkestone to take the troopship back to Australia. He’d arranged by letter to meet Flo after she finished her work as a stenographer, and agreed to meet at the Strand Lyon’s Corner House Café just off Trafalgar Square. The Café was impossible to miss because of its size, and the moment he saw it he was worried he wouldn’t recognise Flo and he’d miss her, but she was waiting just inside the door. Her first welcoming smile was full of the warmth that he’d been longing for, since he’d left Fort George in Albany and set sail for Europe. Flo was everything Don had described and her eyes were the exact turquoise of the opal brooch.

“Shall we have tea and toast?” Flo asked and took his arm and guided him to a table near the window. She was a good foot shorter than he was, and everything about her was perfection, from her dainty feet in black leather buttoned boots to the lock of hair that had escaped from beneath her simple black felt hat. The tea arrived and she poured. They both avoided mentioning Don, but after they’d nibbled their way through their hot buttered toast and the waitress had topped up their tea pot with fresh hot water, John began to explain how Don had lost his life, about the gift he’d brought her and the love that accompanied it.

Outside John knew the War was still going on. He could hear the newspaper sellers outside shouting about the previous night’s aeroplane raid, when thirty-eight Gothas and three Giants had taken off to attack London, but suffered heavy losses with at least Six Gothas being shot down by interceptors and anti-aircraft fire. John wondered if it could be that the tide of war was about to turn, and if not was it just possible that the story of his own life might have a happy ending, or was he hoping for too much from a pair of opalescent eyes.