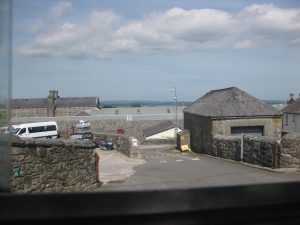 Dartmoor Depot (Prison) in the early 19th housed both French and American prisoners.

The 1812 War with America brought a ‘torrent’ of American prisoners-of-war to swell the numbers already incarcerated at Dartmoor ‘Depot’.  The first 250 arrived in 1813 and remained there until 1815.

The youngest American prisoner was John Seapatch, who was twelve years old. He was born in Massachusetts and according to prison records was 4ft and 9ins tall with grey eyes and a fair complexion. He was sailing on the Harlequin when captured by the British. Seapatch was supplied with bedding at the prison in December 1814 and died in February 1815. The reason for his death was not recorded.

Tyrwhitt had a dream. He wanted to help his employer and friend the Prince of Wales (later George IV) transform Dartmoor, owned by the Duchy of Cornwall since 1337, into a profitable concern.  Tyrwhitt thought that planting flax would be a suitable cash group. Not a good idea to try to grow flax on the windy, exposed moorland!  He eventually managed to grow one crop, but at least his endeavours won him a medal from the Bath Agricultural Society. 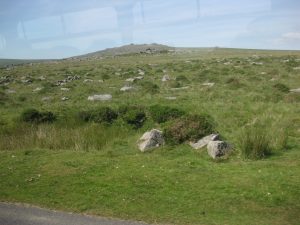 Dartmoor is littered with stone hut circles and bogs. Not the easiest terrain to grow flax on!

Tyrwhitt was not a man to let his dreams be thwarted and in 1785 he built an inn (which is still a favourite with locals).  He named it the Plume of Feathers after the heraldic symbol of the Prince of Wales. This was only the beginning of his plan to transform the inhospitable moorland into a thriving commercial community named Prince’s Town (now known as Princetown).

It took a war for him to partially succeed in his grandiose project.  The Napoleonic Wars between France and England (1803-1815) resulted in French prisoner-of-war depots being set up.  The prisoners were often housed in hulks (captured or old ships) moored in ports like Plymouth, just under 15 miles away from Princetown.  These makeshift prisons quickly became overcrowded, but Tyrwhitt had a solution to build a ‘depot’ on Dartmoor.  In May 1809 the first group of 2,500 French prisoners marched from Plymouth to Princetown and by 1809 there were 5000 prisoners being held in the damp, unheated, but profitable prison.

The French prisoners quickly settled in and formed themselves into separate groups that mirrored their social status.  Those from well-to-do families known as ‘Les Lords’ used their private incomes to amuse themselves by paying for fencing lessons.  The lowest of the low were the hardened gamblers, ‘Les Romains’, who sold all their clothing to feed their addiction and wandered around the prison naked.

Duelling was one way of releasing pent up anger and provided a spectacle for the other inmates. In August 1809 the prisoners decided to organise a procession headed by a band.  An argument broke out about who should carry the French flag.  A prisoner called Sarville challenged the flag bearer and a duel ensued using razor blades attached to long sticks.

In 1809 a turnkey (a jailer who kept the keys) forgot to lock the prison and so a group of French prisoners took advantage of the situation.  The only casualty was a member of the prison staff, who was mistaken for a prisoner and shot.

One very determined inmate, who was helping build a house outside the prison, allowed himself to be ‘built into’ a granite wall.  After dark he pushed his way out and escaped.

The most popular method of escape was to bribe jailers using forged banknotes and at least three prisoners made a clear getaway using this method.

Dartmoor Prison features in The Hound of the Baskervilles by Sir Arthur Conan Doyle. In 1901 Doyle stayed at The Duchy Hotel, which later became the Dartmoor Prison Officers’ Mess and was only a few minutes’ walk away from the prison’s main gate.  He hired Henry Baskerville to drive him to visit nearby Grimspound, a late Bronze Age settlement, and the rest is literary history. 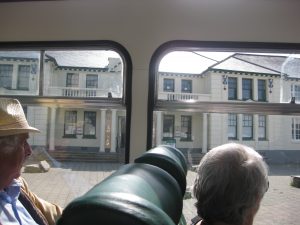 A view from a vintage 1950s coach. Once upon a time this visitors’ centre was the hotel that Sir Arthur Conan Doyle stayed in when walking on Dartmoor.

The notorious London East End ‘gangster’ style twins assumed noms-de-plume to visit the prison, where one of their henchmen ‘the Mad Axeman’, Frank Mitchell was imprisoned from 1962 until his escape in 1966.  The Kray bothers using their ‘new’ names gave a talk to the assembled prisoners on ‘physical fitness’.  According to local myth, the Prison Governor at the time was so impressed by the talk and the inmates’ circumspect behaviour that he invited the Krays back to give a second talk!